Raising A Reader MA’s core program model is based on 25 years of academic research that shows the critical relationship between a child’s early literacy experiences and his or her future academic success. The path toward reading proficiency, and beyond, is clear.

Early Brain Development: According to the National Research Council and Institute of Medicine, the human brain develops more quickly during the first five years than at any other point in one’s life. Studies have also shown that 85% of the foundation for a child’s intellect, personality and skills is formed by age 5. Strong brains are built through interactions, primarily the “serve and return” nature of conversations between child and adult. 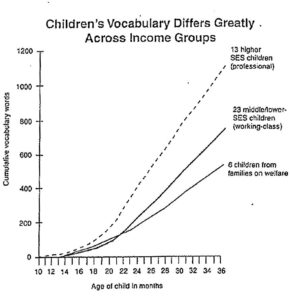 Vocabulary Gap: 35% of U.S. children enter kindergarten unprepared to learn, with many lacking the vocabulary crucial to school success. Risley and Hart’s groundbreaking study, Meaningful Differences in the Everyday Experience of Young American Children, showed that this gap appears as early as 18 months, when higher-income children’s vocabulary first shows a marked difference from their lower-income peers. Additionally, by age three, children from economically privileged families have heard 30 million more words than children from poor families – a statistic that only grows by kindergarten. Because vocabulary at kindergarten entry is a key predictor of third grade reading proficiency, it is vital that all children enter their school-age years on an even playing field.

Parent Involvement: Regardless of income or parents’ education level, the proficiency gap can be erased when parents engage verbally with their children in the early years (Motoko Rich, “Language-Gap Study Bolsters a Push for Pre-K”). Additionally, parents who maintain direct and regular contact with the early educational setting and experience fewer barriers to involvement have children who demonstrate positive engagement with peers, adults, and learning. This family involvement in early childhood sets the stage for involvement in future school settings.

Dialogic/Shared Reading: The best way to enrich a child’s early years with intensive vocabulary is through interactive reading when children are exposed to words they might not hear in everyday life. Studies have shown that the single most significant factor influencing a child’s early educational success is an introduction to books and being read to at home prior to beginning school.

For more information on the foundation of our work, please read the following: